The majority of terrestrial telescopes are prismatic and as such follow the basic design of a large monocular (half a binocular) usually between 50mm and 100mm in diameter, designed for use with a range of different magnification eyepieces. These prismatic telescopes are often called spottingscopes or fieldscopes.

Specifications Opticron telescopes are generally supplied in ‘body only’ format e.g. MM2 52, HR 66, ES 80. These models have objective lens diameters of 52mm, 66mm and 80mm respectively, no built-in eyepiece and as such allow the choice of eyepiece to be made separately. 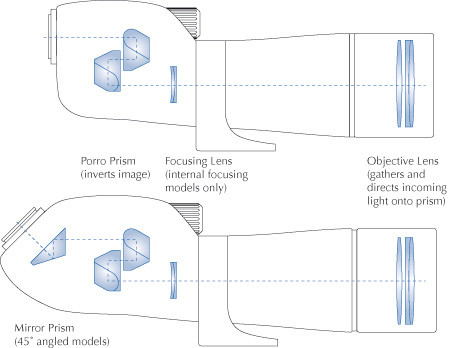 Eyepieces are denoted according to their magnification, whether they are wide angle (WW or WA) or variable zoom eg. 20-60x. A 20x eyepiece allows the object being viewed to appear 1/20th of its’ actual distance away when compared to the naked eye. Using this rule an object 500m distant appears to be only 25m away. A 30x eyepiece makes the object appear 16.7m distant while a zoom eyepiece set at 60x means the same object appears to be just over 8m away.

What magnification? Terrestrial telescopes are most commonly used for high magnification viewing over long distances in daylight. Image quality at different magnifications will depend on the optical system, the quality of glass used and the coatings applied to the surfaces of each lens. There are however a few general rules that can be applied in determining the right specification for your needs. Firstly, the relationship between magnification, objective lens dia. and the size of the eye pupil, and secondly the quality of the optics inside the ‘scope.

In normal daylight, when the pupil is dilated to between 2 and 3mm, a 66 mm telescope will deliver optimum performance, (the balance between magnification and image brightness) between 22x and 35x magnification i.e. when the exit pupil diameter equals that of the iris. In low light when the pupil becomes larger, dilating to between 5 and 7mm depending on age, optimum performance can only be obtained by using a lower magnification eyepiece or using a larger objective lens telescope such as an 80mm or 100mm. The higher the magnification, the greater the image and colour distortion. These effects can be dramatically reduced by using ED or Fluorite combination objective lenses that minimise chromatic aberration, but are expensive. At magnifications of 30x or lower, the benefits of these objective lenses are hardly noticeable when compared to conventional glass objectives.

Field of view is usually expressed as the width in metres of the image when viewing at a distance of 1000m and is directly related to the magnification. Generally the greater the magnification, the smaller the field of view. There are exceptions, namely wide-angle eyepieces which are designed specifically to provide greater fields of view. It is important to note that the objective lens, irrespective of diameter has no influence over the field of view.

Light transmission The best way to assess the actual brightness of any telescope and eyepiece combination when choosing for daytime terrestrial use, (assuming equal optical systems) is to calculate the exit pupil diameter in the same way as with a binocular and making a trade-off between image brightness and magnification desired. For general daytime terrestrial observations good compromise magnifications are between 20x and 30x for a 60mm, 25 to 35x for a 66mm and 25 to 40x for an 80mm.

Eyerelief This is the distance between the eye lens and the point where the pupil is positioned for full field of view and varies from eyepiece to eyepiece. In some cases the eyerelief is shorter than that required by spectacle wearers to obtain the full field of view, especially at higher magnifications. Remember, rubber eyecups although fitted to many eyepieces are no guarantee that the full field of view is obtainable when set in the ‘down’ position and used with glasses.

Straight-through or 45° angled Common advantages of an angled telescope are that: i) the back, shoulders and neck are in a more relaxed position when looking through the ‘scope, ii) the tripod can be set at a lower position making it easier for people of different heights to use and the equipment more stable in outdoor conditions. Straight-through telescopes are easier to use when following fast moving objects, using the instrument from the confined spaces of a hide or vehicle, or when hand-held.

Our advice Product reports are generally subjective and are no substitute for individual testing. If you are unable to test before you make a purchase, contact us for information and advice on the best model to suit your needs.