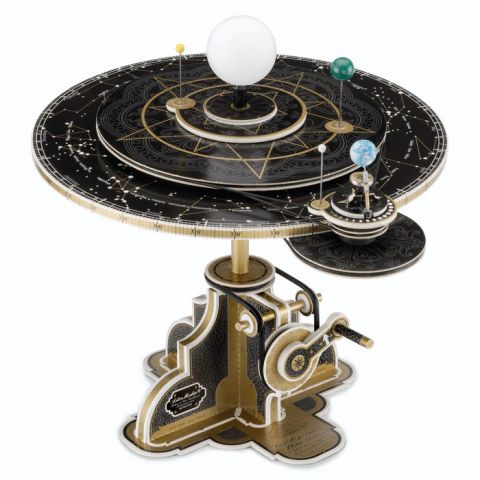 A world premiere: the first ever fully functional cardboard orrery! It demonstrates the movements of Mercury, Venus, Earth and Moon around the Sun. One turn of the crank represents one week and shows the relative movements of the heavenly bodies accurately. The 4.5 cm measuring illuminated sun in the centre helps demonstrating the seasons, phases of Moon and Venus, eclipses, and much more. A fantastic kit that never fails to impress! 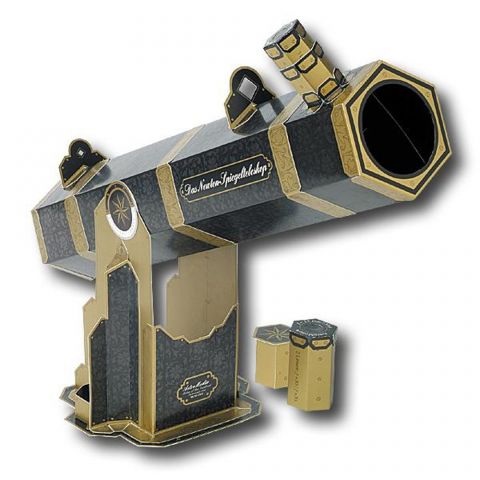 Lens telescopes exist since 1609 when the Dutch maker of spectacles, Jan Lippershey, sold the first telescopes made out of a concave and a convex lens. They produced an upright standing image and had a 3 1/2 times magnification. Galileo Galilei (1564-1642) improved on this invention and was the first to make astronomical observations with it. Today almost all lens telescopes are built according to the principles of Johannes Kepler (1571-1630). His telescope, based on two convex lenses, produced an upside down but much bigger and better focused image.

Isaac Newton (1643-1727) invented a telescope in which the lens was replaced by a concave mirror. The light was now gathered, reflected and then directed sideways to an eyepiece by a small flat slanted mirror. The optical properties data of the AstroMedia* reflecting telescope roughly correspond to those of the first instrument built by Newton. The mirror has a focal length f=450mm . It’s curve is spherical, i.e. it has the same round surface as a globe. 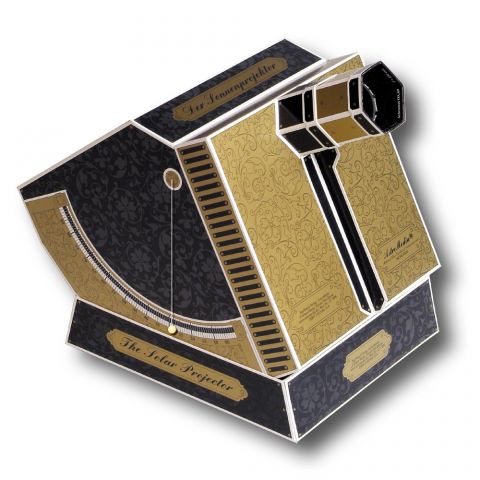 The sun has been observed with a telescope almost since the telescope’s invention, but it can be dangerous. Only by using a strong filter is the sun’s light dimmed enough to prevent eye damage. Today there are many suitable solar filters, for example the AstroSolar-Sun filter foil from AstroMedia.

The solar projector gets round this problem, because the sun is not viewed directly, but instead an image is formed by the optical system. This means that the sun can be observed completely safely without a solar filter. The solar projector uses the principle of the Camera Obscura (pin hole camera), with which solar eclipses have been observed since the 11th century and which is still used today in every camera: Light comes through a small opening into a dark chamber and creates an upside-down image of the outside world on the opposite wall.
Instead of a simple opening, the solar projector has a lens and a convex mirror, which together work like a Galilean telescope and produce a strongly magnified image. A plane mirror reflects the image to a comfortable viewing position. However, the main principle remains that of the camera obscura.
Complete cardboard kit contains:
8 printed cards A4 size
1 achromatic glass lens
2 convex mirrors and
1 acrylic glass plane mirror 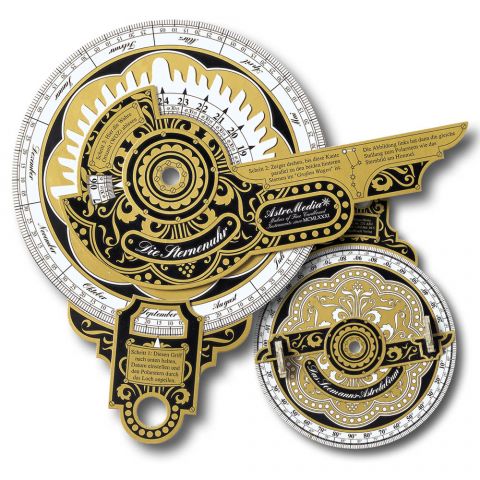 Shepherds, hunters and members of other trades who regularly performed their work at night time have always been able to read the time according to the position of the stars. Towards the end of the Middle Ages resourceful astronomers and makers of instruments invented the stardial, also called Nocturnal or Nocturlabium and first mentioned in 1295, for serving the ignorant town dweller or the impatient soldier being on night-watch. This sophisticated instrument makes use of the fact that the constellation Big Dipper orbits the Pole Star once in 23 hours and 56 minutes as if it were the pointer of a huge clock. Due to the difference of 4 minutes compared with an entire day the stardial is set to the current date prior to reading. Then it displays with amazing accuracy the true local time.

The mariner’s astrolabe on the back was usually made from heavy brass so it would not sway in the wind so easily and could take simple measurings of the elevation angle of sun and stars. From this again important conclusions could be made about the present position on the sea. In the 17th century this was a widespread instrument, it was for example part of the standard equipment of all ships of the Dutch East India Company.
Complete cardboard kit contains:
2 die-cut cardboards, 0,4 mm, printed.
2 die-cut cardboards, 1 mm, non-printed 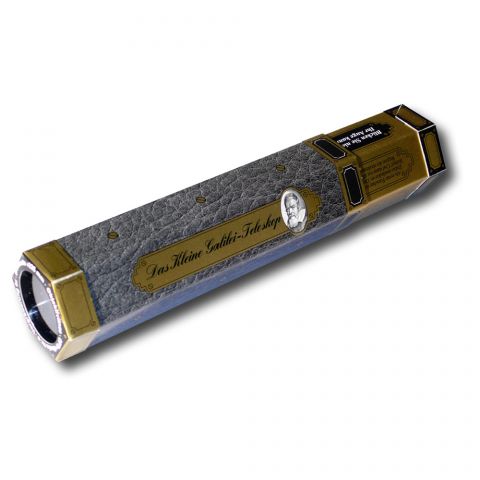 Two lenses connected by a cardboard tube: it’s that simple to build a telescope!
The prepunched kit contains an objective lens with 225 mm and an eyepiece lens with 35 mm focal length. This produces a magnification of 6.5.
The assembly is simple and takes only 20 minutes. An ideal project for groups and school classes. The picture is upright, therefore the telescope can be used by day or for astronomical observations (e.g. moon craters).
Construction time: 20 min
Length fully extended: 23 cm 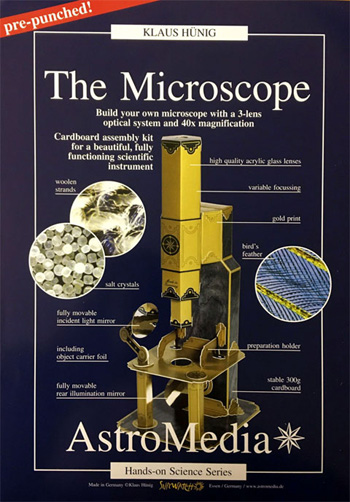 Build your own microscope with a 3 lens optical system and a 40 x magnification Cardboard assembly kit for a beutiful, fuly functioning scientific instrument. 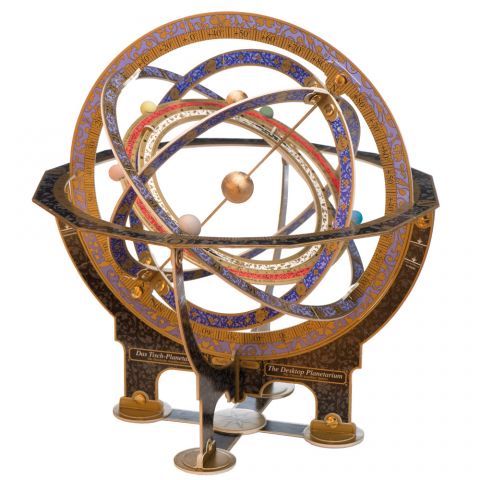 Kit for a classical armillary sphere, the standard instrument for observer-centred astronomy for over 2000 years.
With this beautiful Desktop Planetarium you can easily visualise the movement of Sun, Moon, planets, and fixed stars above and below the horizon for any location on Earth and any day of the year. A real gem, not only as an astronomical instrument and teaching tool, but also as a fantastic showpiece.

Features:
-Meridian adjustable for all angles including north and south pole
-Ecliptic with dates, degree scale, and stellar constellations
-Equinoctial with apparent local time, twilight zones, and lengths of day and night
-Lunar orbit with moveable nodes and eclipse indicators
-Foam rubber planets that can be positioned freely on the ecliptic
-Constructed from four layers of cardboard, nearly as strong as laminated wood
-Collapsible when built with our optional set of Barrel Bolts (see below)! 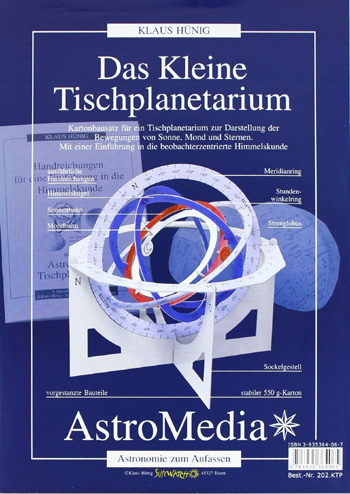 Detailed punched cardboard box for an 18 cm high armillary sphere that allows the movements of the sun, moon and starry sky to be represented all over the world at any time. The table planetarium dates back to an invention of ancient Greek astronomers. It is a vivid, educational astronomical model and at the same time a piece of jewelery for the desk. Complete with an interior and exterior printed star globus made of paper as well as an introduction to the heavenly knowledge for everyone. 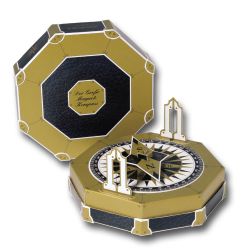 Build a beautiful fully functional magnetic compass to take bearings and find the cardinal points. This excellent kit is more than a toy and allows an accurate fix on land and sea marks. Comes with its own protective case 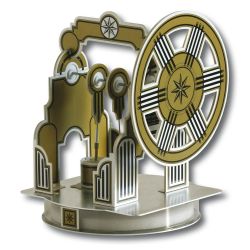 With this cardboard kit you can actually build a working stirling engine. Just place the engine on a cup with boiling water and it will move silently for up to an hour! Here you can see it running on YouTube.
The kit comes complete with all necessary parts like laser-cut aluminium plates, low-friction PVC bearings, steel crank, and vinyl seal. The instruction booklet also contains information about the historical background and tuning tips for longer running time. 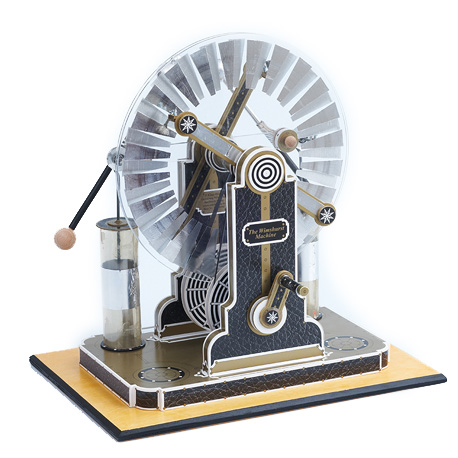 The classical high voltage generator - with limited current for safe experiments! For many people this machine is the most vivid memory of their physics classes at school. Everybody is fascinated by the crackling flashes of lightning that appear between the electrodes when the crank on the back is turned. Two counter-rotating acrylic discs with aluminium segments produce static electricity of up to 70,000 volts that is stored in two Leyden jars made from PVC and aluminium foil. The Leyden jars are discharged via two spherical electrodes, producing bright sparks. The capacity of the Leyden jars is limited by design, so that the produced electricity is completely harmless (rather like the light electric shock one receives sometimes when touching a door knob). A fantastic kit!

A steam engine made from cardboard, running with proper boiling steam - is that really possible?
See for yourself: this model not only looks great, it also works, happily chuff-chuffing away. The boiler, made from an aluminium tin, has a magnetic safety valve. The aluminium fire box underneath holds five tea lights. Both are enclosed in a safety cage made from galvanised wire mesh. The steam is conducted through a closed system of tubes and plastic foil before being emitted through the chimney.
This clever construction keeps cardboard and steam separated with the piston being moved by a bellows made from the finger of a plastic glove. 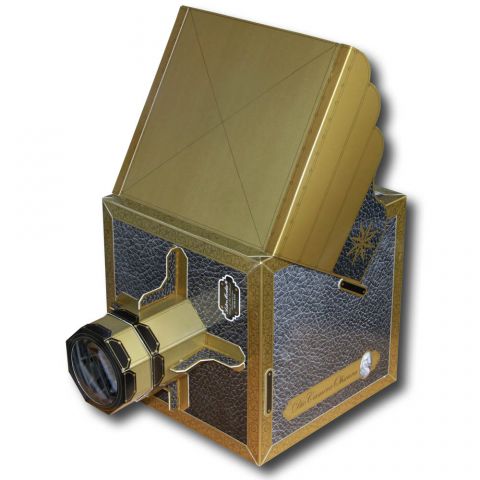 All our modern cameras have one common ancestor - The Camera Obscura: the light of the outside world falls through a pinhole onto the opposite wall of a room and produces an upside-down picture. In the 16th century the camera obscura was greatly improved by an objective lens, which produced much brighter pictures and around 1750 many painters, like the Venetian Canaletto, used it to make sketches for their paintings. Then in 1836 Nicéphore Nièpce projected the picture on a light-sensitive plate and the photographic camera was born.

Our beautiful, sturdy Camera Obscura is equipped with a powerful lens (60mm diameter, 275mm focal length) and a mirror for an upright picture, like the one Canaletto used. The picture is projected onto a 16x16cm screen with transparent paper on which it can be viewed or copied by pencil.